Headphones with noise canceling features are already known. These headphones keep out the surrounding noise and help listen to the audio with better quality. However, no such device is available to stop unwanted audio from going into the microphone. Sometimes you are at a place where someone else is also present. You want to say something in private without anyone around you listening to what you are saying. It will require speaking in whispers, making it difficult for the person on another side to understand what you are saying.

Now there is a device to help you say whatever you want without disturbing nearby people. The Panasonic subsidiary Shiftall has come up with mutalk which is a device with a microphone. It lets you speak without anyone around you hearing what you are saying. This contraption sits over the mouth with its strap going behind the head. It will also prevent the voice of other people around you from going into the microphone.

Mutalk looks like a contraption to muzzle your voice but it is designed to help you speak without worrying about disturbing nearby people. Now you can speak in privacy even when someone is present near you. You will look like a sci-fi character, especially after you add the VR headset, but it gets the job done. 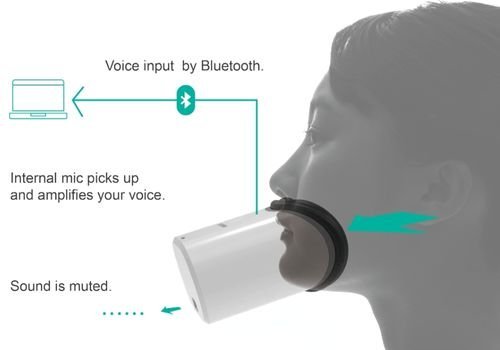 Mutual connects through Bluetooth as soon it detects the user wearing it. This device is one of many accessories that have been developed by the company to improve virtual reality experiences. It is not available for purchase right now but is expected to cost $140 when launched.