An AI That Writes Mega-Cringe LinkedIn Posts Was Acquired by a LinkedIn. 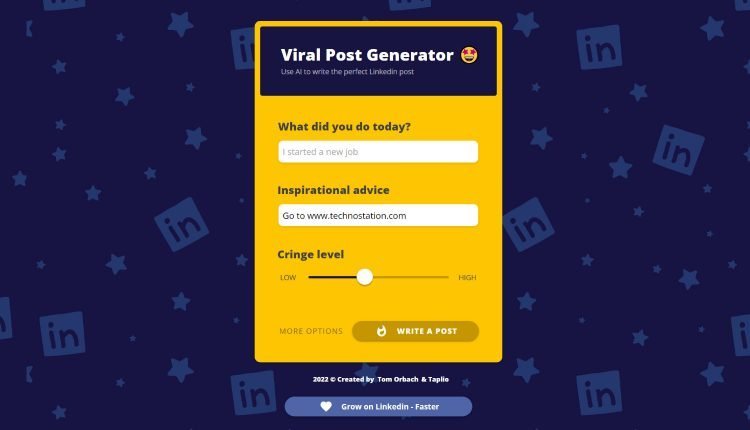 A few days ago, the popular marketer, Tom Orbach, took Twitter by surprise when he launched his LinkedIn Viral Post Generator. It is a website that generates cringe-worthy and sometimes hilarious LinkedIn posts. The website is powered by Artificial Intelligence and people on the internet absolutely loved what the Viral Post Generator came up with.

Orbach claimed that he created the post generator with the help of AI. The AI analyzed more than 100,000 viral LinkedIn posts to come up with hilarious and cringe content. Orbach launched the tool on Twitter on August 15 and said that it is capable of producing mega-cringe posts on its own and can personalize them for anyone.

All the user has to do is tell what they did today, feed some inspirational advice, and select the cringe level they want. The tool will automatically generate obnoxious posts for the user.

You can click on the following links to view some of the posts created by the Viral Post Generator:

The tool got so popular that a LinkedIn marketing agency decided to pay actual money to acquire it. Yes, you read it right and we aren’t kidding!

Recently, Tom Orbach accounted that his AI tool has been acquired by Taplio – an advertising agency that specializes in producing LinkedIn content. Orbach, who didn’t expect the tool to receive such popularity was immensely happy with the acquisition that happened within 1 week of the tool’s launching.

While Orbach didn’t reveal the amount of the deal, he expressed his gratitude on Twitter. He also said that he will be using the money that he acquired from the deal to fund his next projects.

Gensler, the chair of the US SEC, reiterates his position on cryptocurrency.